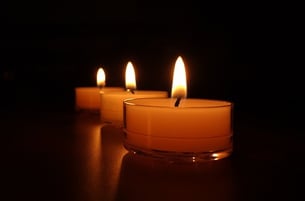 For centuries, candles have been utilized for light, decoration, religious ceremonies and much more.  The production of modern candles is a complex process, susceptible to several hurdles. Their main constituent, paraffin wax — which is desirable for its relatively low melting point of ~60°C [1] — experiences volatile changes in cost as it is a by-product of crude oil production [2].  Additionally, during cooling, different parts of the jar candle solidify at different rates due to low heat conduction throughout the wax. This leads to uneven settling (referred to as surface undulation), which forms a cavity in the center of the candle and requires a post-process void-filling operation (see Figure 1).

Simply adding water to a candle melt would, of course, not work: there is a steep contrast in affinity between water and paraffin wax (hydrophobic by nature). Recently, a laboratory-scale method of producing a candle from a wax, wherein a dispersion of water droplets is purposely added, has shown that water-in-wax candles can mimic the character of full wax candles when the water droplet size is in the sub-micron range.  Since Industrial Sonomechanics’ ultrasonic technology permits producing highly stable nanoemulsions on an industrial scale, this solution can now become applicable commercially.

In order to demonstrate the effectiveness of this approach, we made seven 100 ml jar candles using ultrasonically prepared nanoemulsions of water in paraffin wax (Gulf wax) with polysorbate-60 and sorbitan monostearate surfactants. For each candle, equal amounts of each surfactant were used, and the total surfactant content was maintained at 20% of the water content.  The samples were pre-mixed at 70 oC and sonicated at the same temperature for 3 min using our LSP-500 Ultrasonic Liquid Processor in the batch configuration (see Figure 2). A water bath was utilized for temperature control. 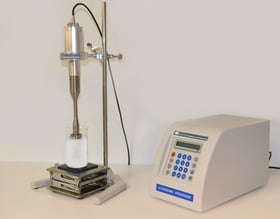 The resulting nanoemulsions were poured into 200 mL, 2.5” X 2” (L X D) glass candle jars with wicks, allowed to solidify at room temperature overnight, and subsequently analyzed for the volume of undulated void, flame height and burn rate. The objective of these experiments was to determine the concentration of water in the wax that can minimize a candle's surface undulation while maintaining or improving its flame character.

Table 1 describes mass proportions of each constituent in the prepared nanoemulsion candles.

After each sample had fully solidified, water was filled into the resulting cavity and the change in mass was recorded.  This procedure was performed in triplicates.  The average mass in grams of each sample corresponded to the volume of the void in milliliters.

Table 2 shows the undulation volume for each candle and the extent of undulation reduction achieved by water addition.

Table 2. Volume of undulation for each candle.

Each candle was lit and allowed to burn for 2 hours.  The change in candle mass was recorded, as shown in Table 3.

Table 3. Change in mass and burn rate for each candle.

The height of each candle’s flame was measured from the surface of the melted wax pool to the top of the flame. The results are shown in Table 4.

Table 4. Flame height for each candle.

Figure 3 shows the surface undulation reduction (represented by a decrease in the volume of the void created during candle solidification) with increasing water content. The reduction can be explained by the progressive improvement in heat conduction in the candle material, which allows the settling during solidification to occur more evenly.

Figure 3. Void volume as a function of water content.

As seen in Figure 3, the water fraction must be 15 percent or greater for adequate reduction of void volume.  The voids for Candles 3 - 6 are less than 10% of the total volume, while the void in the control (Candle 0) is greater than 20%.  The change in the undulated void can be visualized in Figure 4, which compares the control Candle 0 to Candle 3.

Figure 4. Comparison of surface undulation in control Candle 0 and Candle 3.

The minimization of the void in the middle of the candle presents an opportunity to eliminate or significantly decrease the post-process void filling operation in candle production. 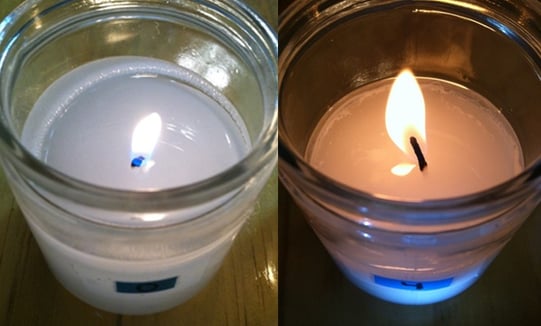 Figure 6. Burn Rate and Flame Height as a function of water content.

For each candle, a consistent steady flame was achieved with no substantial deviation in smoke.  The burn rates and flame heights in nanoemulsion candles were generally greater than those in the pure wax control (see Figures 5 and 6). This may be due to the flatter surface of the nanoemulsion candles, which results in less flooding of the wick with the molten wax. Another possible reason is the reduction of the melting temperature of the candle material (water-in-wax nanoemulsions have lower melting points than the pure wax), which produced a more mobile liquid, able to travel up the wick faster. Only Candle 6 exhibited a lower flame than the control, which could be a result of quenching by an excessive amount of water. Figure 6 shows the burn rate and flame height as a function of the water content in each candle.

The flame height (red squares) at 20% water content was about double that of the control.  Taller flames are advantageous because more light is produced from a single candle.  The burn rate was also proportionally increased as an expected result.  It is important to point out that melting point reduction due to the presence of water in nanoemulsion candles potentially makes it possible to use significantly cheaper higher-melting waxes for candle production.

We have successfully demonstrated that the production of wax candles can be enhanced by nano-emulsifying water into wax in the form of nano-droplets. Nanoemulsion candles had higher flames, while exhibiting significantly reduced surface undulations and lower melting points. This approach potentially eliminates the post-process void filling operation currently required during candle production. In addition, replacing about 15 - 20% of the wax with water and being able to use cheaper higher-melting waxes can help significantly reduce candle production costs.

Taieesa Peshkovsky is a recent graduate of High School for Math, Science and Engineering at City College (HSMSE). Taieesa is an intern at Industrial Sonomechanics and is participating in various process development projects.