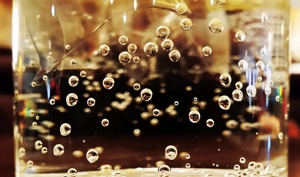 Degassing (deaeration, in the case of air) is the process of removing dissolved gasses and/or small entrained gas bubbles from a liquid. It is one of the most common applications of ISM's ultrasonic technology, which provides the means of removing the gasses from a variety of liquids, including water, candle waxes, polymers, epoxies, silicone oils, adhesives, coatings, beverages, inks, paints, transformer oils, emulsion and suspension products, motor oils and many more. Degassing can significantly contribute to the quality of the final product (fewer defects, improved aesthetics, etc.), making it a very desirable process for many companies.

In this blog post we demonstrate the processes of ultrasonic degassing and deaeration of a high-viscosity (17,500 cps) polymer oil, carried out in the batch mode.

The vibration amplitude of the Barbell horn was maintained at 80 microns throughout the experiment. 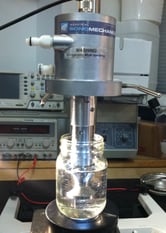 The liquid was poured it into the glass container ("Initial sample"), and no bubbles were deliberately introduced.  Although some suspended bubbles were present, most of the gas to be removed comprised dissolved volatiles (1.5%). The sample was then exposed to ultrasound for approximately 1 min 40 sec ("Ultrasonic exposure"), during which the dissolved gasses were extracted from the liquid in the form of large suspended bubbles. This step was followed by a resting period of approximately 5 minutes to allow the bubbles with the extracted gasses to surface and break ("Bubbles surface & break"), resulting in the "Degassed sample" shown in the picture below.

As can be seen in the first part of this video, after approximately 1 min 10 sec of ultrasonic exposure, there was a dramatic change in the cavitation intensity. Sometimes this "intensity jump" is used as an automatic method of determining the end of the degassing process. It occurs for the following reasons:

The BSP-1200 processor operates in the constant-amplitude mode: once the ultrasonic amplitude is set, it always remains at the same level. The power provided by the generator is automatically adjusted based on a principle similar to that used in the cruise control of a car, where engine power output is increased when going uphill in order to maintain constant speed (amplitude, in our case). When volatile fractions are fully degassed from the oil, its properties abruptly change: cavitation enters into the vacuum-bubble regime instead of the gas-filled bubble regime. This leads to a higher power draw for the same amplitude setting, resulting in a "jump" of the cavitation intensity.

For the second experiment, we first introduced air bubbles into the liquid by using a hand-held mixer ("Introducing bubbles"). The sample was then exposed to ultrasound for approximately 1 min 15 sec ("Ultrasonic exposure"), during which the small suspended bubbles coalesced into large bubbles with higher buoyancy. This step was followed by a resting period of approximately 5 minutes to allow the large bubbles to surface and break ("Bubbles surface & break"), resulting in the "Degassed sample" shown in the picture below. This time, the cavitation intensity "jump" occurred after approximately 1 min 10 sec of ultrasonic exposure, as can be seen in the second part of this video. 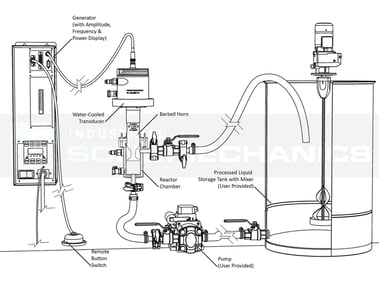 In a production environment, the degassing/deaeration process is most commonly carried out continuously, which makes it possible to treat large volumes of liquid and ensure reliable and uniform results. The most common arrangement for this process is presented in the schematic on the left. The liquid is drawn from the bottom of the storage tank and pumped through the ultrasonic reactor chamber/Barbell horn assembly, where ultrasonic cavitation continuously transfers any dissolved gasses and/or suspended micro-bubbles into large bubbles with high buoyancy. The large bubbles are then carried with the flow of the liquid either back to the same storage tank (recirculating configuration) or to another tank (single-pass configuration), where they can surface and release the gasses to the environment. If the recirculating configuration is used, care must be taken not to draw any of the large bubbles back into the line. Special tank features may be incorporated, such as a barrier with a narrow gap at the bottom positioned between the inlet and the outlet, a sealed lid with a vacuum connection, a surface at the inlet to force the breaking of the bubbles, etc.

Video of the experiments 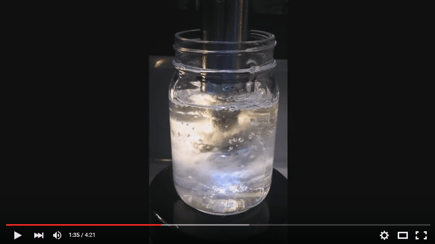 Iva Gyurgina is the Director of Marketing and Customer Relations at ISM. She is responsible for creating and delivering ISM’s marketing materials and managing correspondence with ISM clients. Iva holds a B.S. in Finance and Management Information Systems from Seton Hall University as well as an M.B.A. in Marketing and Management from University of Connecticut. Prior to joining ISM, Iva was a Tennis Professional and has managed tennis clubs’ programs in several locations in NY. She has also worked in wealth management, technology and pharmaceuticals industries. Iva has proven experience in building customer relationships and delivering marketing strategies.