Do you need to make a product that comprises a homogeneous mixture of oil and water? Is stability of this product a major concern? If so, you are not alone. One of the biggest challenges faced by product developers and process engineers in a wide variety of industries is achieving long-term  stability of products based on combinations of oil and water.

Oil and water do not mix, unless special procedures are followed.

It is well known that no matter how vigorously you stir oil and water together, the best result you can achieve is a temporary dispersion of droplets. As soon the stirring stops, the droplets start coming together, growing in size until finally becoming a separate layer. It is, however, possible to improve this process by mixing oil and water in the presence of a surface-active agent (surfactant). The result is called an oil-in-water emulsion (or a water-in-oil emulsion) - a visually homogeneous mixture that combines the properties of both oil and water, one of which is the continuous phase and the other - the dispersed phase.

Emulsions can be extremely useful. In pharmaceutical industry they are used to deliver oil-soluble active ingredients through the blood, which mostly consists of water and would not dissolve these compounds. A similar principle is also utilized by the pesticide and cosmetics industries. Metalworking industry employs emulsions for simultaneously cooling and lubricating metal parts as they are machined. Water can be emulsified into fuels in order to make them burn cleaner. Flavor oils are frequently added to water-based beverages in the form of translucent emulsions (see below). Emulsions may also serve as transient states in mass transfer-limited chemical processes, where oil and water-based reagents need to come into close contact and high interfacial surface areas are required (e.g. crude oil desulfurization, biodiesel production).

Microemulsions are thermodynamically stable, but have several disadvantages.

Unfortunately, although visually homogeneous, emulsions are thermodynamically unstable, which theoretically means that it is just a matter of time before they separate into layers and become unusable as products. The only exception is the class of so-called microemulsions, which require prohibitively high surfactant concentrations for most applications and suffer from temperature, pH and other instability issues.

Nanoemulsions are kinetically stable and preferred for most industries. 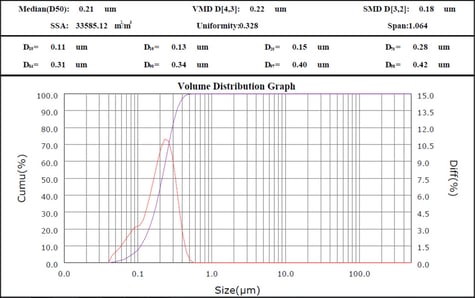 Although thermodynamic instability of emulsions may seem like a fundamental problem, there are ways to create kinetically stable emulsions. These products, despite theoretically being unstable, can last for such long periods of time (years) that they are stable for all practical purposes. Kinetic stability occurs when the dispersed phase's droplet size distribution is narrow and its mean droplet size is smaller than about 300 nanometers. Because of their small size, Brownian motion of these droplets can overcome creaming or sedimentation processes that otherwise would cause their eventual coalescence and separation as a separate layer.

Appropriate surfactants and strong shear forces are needed in the production of stable emulsions.

The production of kinetically stable nanoemulsions requires a combination of two conditions: 1) the use of optimized surfactant formulations and 2) the exposure to strong shear forces that can overcome the viscous resistance during the finely dispersed droplet formation. Although low-energy nano-emulsification methods exist, they are not applicable to industrial production because they require high surfactant concentrations and involve complex preparation procedures.

The job of surfactants is to assist in the breakup of the droplets by lowering the interfacial tension as well as to stabilize the resulting smaller droplets by adhering to the newly generated interface. Frequently, the use of more than one surfactant is beneficial, and it is essential to use the right types and relative concentrations of surfactants.

The shear forces necessary for the nano-emulsification process can be provided by such means as stirring, high shear mixing, high-pressure homogenization or high-amplitude ultrasound (sonication). The latter two methods have been demonstrated to be superior to all others, being able to produce nanoemulsions with the smallest droplet sizes and the highest stability. Laboratory, bench and industrial-scale ultrasonic processors able to generate extremely high shear forces are available and can be used for the production of nanoemulsions with exceptional stability.

Systematic procedures for the production of stable emulsions have been developed.

If you are experiencing stability-related issues with your emulsion-based product, you can benefit from adhering to systematic procedures aimed at minimizing the droplet sizes of its dispersed phase. Once your product’s formulation is finalized and the procedure is optimized on the laboratory scale, the process can be transferred to the production scale. During scale-up, it is essential to make sure that all processing conditions (e.g. ultrasonic amplitude, temperature, etc.) are unchanged. If this condition is met, the quality of the final product will remain at the optimized level, while the productivity is increased by a predictable "scale-up factor".