Whether you use ultrasonic processing for making nanoemulsions, milling pharmaceutical crystals, degassing, extracting botanical oils, manufacturing bio-fuels, dispersing pigments, disrupting cells or enhancing a chemical process, there are several general terms you need to be familiar with. Knowing these terms and keeping track of the corresponding parameters will insure reproducibility of results and simplify process-related discussions with your peers.

The effectiveness of an ultrasonic processor is directly related to the intensity, homogeneity and size of the cavitation field it can create in liquids. We will cover the subject of ultrasonic cavitation in a separate post. For now, suffice it to say that the main objective of keeping track of the ultrasonic amplitude, power, frequency, power intensity and power density is to ensure the best cavitation filed profile for the given task, resulting in the highest processing rate for the target product quality. 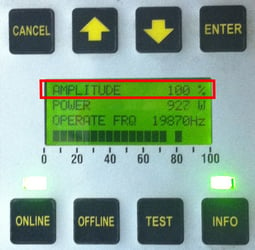 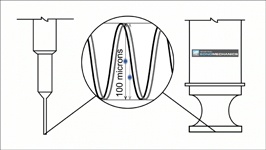 As mentioned in our previous post, an ultrasonic horn is the component that transmits ultrasonic vibrations to the liquid being sonicated and is responsible for creating cavitation. The amplitude of the horn's vibrating surface is defined as the distance between its position in the horn's fully extended and fully contracted states, measured in microns (µm). The amplitude can be adjusted from the generator's control panel, and each horn has a specific maximum amplitude. The amplitude is set to a certain level in %, which corresponds to a value in microns that can be identified using the horn's calibration certificate. Once the amplitude is set, it will remain at the same level throughout the process, regardless of all other conditions (like cruise control of a car, which maintains the speed at a predetermined level). 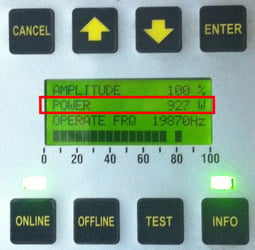 Power is the measure of energy per unit of time that is conveyed from the generator to the sonicated liquid. It is measured in watts (W) or kilowatts (KW) and is displayed on the generator’s screen in real time. The power cannot be set directly because it is the consequence of several parameters, including the amplitude, liquid viscosity, and pressure in the reactor chamber (for flow-through configurations) or horn immersion depth (for batch configurations).

The power is automatically adjusted by the generator based on a principle similar to that used in the cruise control of a car, where engine power output is automatically increased when going uphill in order to maintain constant speed (amplitude, in our case). If sonication conditions require more power than the generator is able to provide, an overload error is reported and the ultrasonic output is disabled. 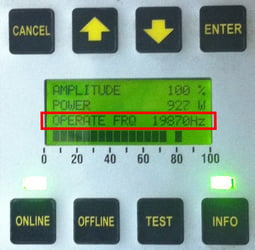 Frequency measured in Hertz is the number of occurrences of a repeating event per second.

Most high-power ultrasonic liquid processors operate at the frequency of approximately 20 kHz, meaning that their horns complete 20,000 vibration cycles per second. Most sophisticated processors are able to automatically adjust the frequency in the window of 19 - 21 kHz, based on the horn's natural (resonance) frequency. Horns are "tuned" devices and operate "on resonance" only, like strings of a guitar. The resonance frequency of the horn is tracked and automatically adjusted by the generator during operation in order to compensate for any changes due to temperature fluctuations. In some models, real-time frequency information is shown on the generator display.

Power intensity refers to the amount of power delivered to the sonicated liquid via a unit (cm^2) of the horn's radiating area. For example, for two horns with radiating areas of 20 and 40 cm^2, both delivering the power of 1000 W to the liquid, the power intensity will be 50 W/cm^2 for the first and 25 W/cm^2 for the second horn. For a given set of load conditions (liquid type, temperature, pressure), this difference in power intensities would mean that the first horn is operating at approximately twice the amplitude of the second one and produces twice the cavitation intensity.

It is important to point out that a processor's power rating information by itself is insufficient for accessing its ability to affect liquids. If the radiating surface is too large, even a very high power rating will result in a low power intensity and produce large, but weak cavitation field, unable to induce significant physical and chemical effects.

Power density is the amount of delivered power per unit of sonicated liquid volume. For the constant-volume modes, such as the batch mode (e.g. liquid in a beaker) and the recirculating flow-through mode, power intensity and power density are directly related and can both be used to represent cavitation strength and the effectiveness of sonication. For the single-pass flow-through arrangement, however, one must take into account the total volume of the liquid that passes through the cavitation zone during treatment.  In this mode, power density is inversely proportional to the treated liquid's flow rate through the reactor chamber as well as to the total processing time. 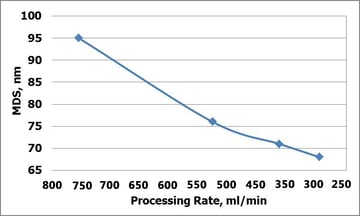 Processing rate describes how much product can be made per unit of time with a given ultrasonic processor.  Maximizing the processing rate while maintaining the desired product quality is commonly the main goal of optimizing the parameters described above.  After the optimization is done, a curve similar to the example presented here (for the production of a translucent nanoemulsion) is obtained, where product quality (Mean Droplet Size, in this case) is correlated with the processing rate, allowing to make final setup decisions. If a higher processing rate is required for the same product quality, the process can be scaled-up by switching to a larger processor (while making sure not to change any of the optimized parameters) or by using more than one processor in parallel or in series.