Oil phase separation due to creaming/sedimentation, flocculation and/or Ostwald ripening

Oil phase separation from an O/W nanoemulsion can occur 1) when buoyancy or gravitational forces acting on suspended oil droplets make them float/sink (creaming/sedimentation) and, therefore, come into close proximity to each other, 2) due to attractive interactions between the droplets (flocculation) and/or 3) as the result of larger droplets' growth at the expense of smaller ones (Ostwald ripening).

For inadequately formulated or under-processed nanoemulsions with oil droplets larger than 200 - 300 nm, a mechanism known as creaming takes place when the buoyancy force causes the droplets (having a lower density than the continuous water phase) to rise to the top. In less common situations where the dispersed oil phase density exceeds that of water, the droplets sink due to gravitational forces - a process referred to as sedimentation. As droplets collect at the top or the bottom, they come into close proximity with each other and coalesce (combine with each other) until complete oil phase separation occurs. Another possible consequence of inadequate formulation is flocculation (droplet agglomeration), which occurs when initially dispersed oil droplets gather into clusters as the result of insufficient droplet repulsion. Flocculation is generally followed by creaming and coalescence after the clusters become large enough. 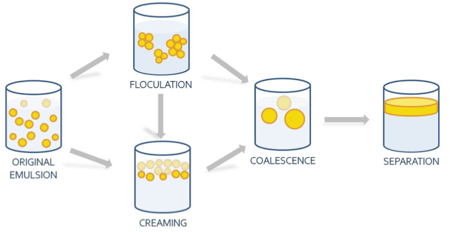 Smaller oil droplets experience higher Laplace pressure (the difference in pressure between the inside and the outside of a curved surface), which increases their contents' solubility in the aqueous (water) phase. The result is a secondary, yet frequently encountered nanoemulsion destabilization mechanism known as Ostwald ripening that occurs when oil molecules from smaller oil droplets (with relatively higher Laplace pressure and oil solubility in water) dissolve into the aqueous phase and precipitate onto larger oil droplets (with relatively lower Laplace pressure and oil solubility in water). Under this mechanism, therefore, larger droplets grow at the expense of smaller ones until creaming begins to occur, ultimately leading to coalesce and phase separation. 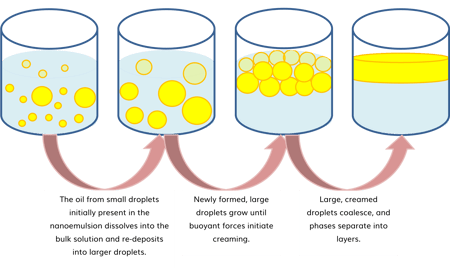 When creaming/sedimentation, flocculation and Ostwald-ripening processes are properly mitigated, nanoemulsion destabilization and the resulting phase separation can generally be avoided. The table below lists some of the possible instability causes along with the associated destabilization mechanisms and recommended preventative measures:

Cannabis extract-containing O/W nanoemulsions that have been processed and formulated properly are known to exhibit long-term kinetic stability - they can be considered indefinitely stable against all physical pathways leading to phase separation. This being said, chemical and biological degradation pathways may still be at play, as described below: 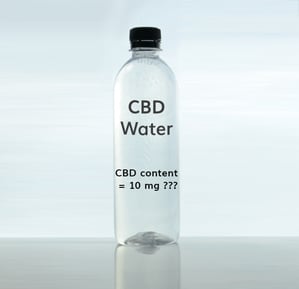 It is well documented that many cannabinoids, including cannabidiol (CBD) and Δ9-tetrahydrocannabinol (Δ9-THC), can undergo oxidative degradation upon exposure to air (oxygen) and light (UV) [1]. This remains true for cannabinoids incorporated into nanoemulsions. It is, therefore, recommended that finished cannabis extract-containing nanoemulsions be kept in dark, air-tight containers during storage. Additionally, antioxidants (e.g., tocopherols, carotenoids, terpenes) can be incorporated into the formulations to further limit oxidative degradation.

As in many water-based products, microbial growth in nanoemulsions is a potential shelf life-limiting pathway. If a microorganism (e.g., fungus) is allowed to exist and proliferate in a water-based product, it may reduce its potency and even make it harmful. Processing under aseptic conditions can help circumvent this issue, but this is generally an excessively expensive approach. Luckily, it is easy and inexpensive to eliminate the presence of microorganisms in a nanoemulsion by sterile filtration using a hydrophilic filter membrane with 220 nm pores. It is, however, important to point out that all droplets in the nanoemulsion must be below 220 nm for this to be effective, otherwise filter clogging and material loss is likely to occur. This typically requires the nanoemulsion to be at least somewhat translucent.

The filtration step performed after the nano-emulsification process carried out with the BSP-1200 ultrasonic processor is demonstrated on the left. For further information, see: "Why Sterile-Filter Water-Compatible Cannabis Extract Nanoemulsions?"

Although sterile filtration ensures that the finished product does not contain microorganisms, once a nanoemulsion container is opened (for instance, by the end-user), the product becomes exposed to the microorganisms in the atmosphere. To mitigate the effect of this exposure, cannabis extract nanoemulsions, as most water-based products, should contain small amounts of preservatives.

In order to protect nanoemulsions from light, oxygen and microbial contamination, they should be sterile-filtered and stored in dark-glass, air-purged, autoclaved and sealed containers. Unless frozen or boiled, nanoemulsions tend to be stable in a wide temperature range, however, refrigeration is recommended as an additional precaution against microorganism activity.

All nanoemulsion destabilization pathways can be avoided by correctly formulating, processing and storing these products. To enable companies in the pharmaceutical, nutraceutical and food & beverage industries to manufacture their own high-quality nanoemulsions, Industrial Sonomechanics (ISM) offers high-intensity ultrasonic liquid processors with unsurpassed nano-emulsification capabilities at laboratory, bench and industrial scales. Our equipment clients who do not have the capability or desire to develop and optimize their own formulations and processing procedures can also take advantage of all-in-one NanoStabilizer®. When used in conjunction with ISM ultrasonic processors, this blend of food-grade (GRAS) carrier oils, emulsifiers, and preservatives (all derived from natural sources) makes it possible to easily and quickly produce highly translucent, permanently stable and fully water-compatible nanoemulsions with median droplet sizes (d50) in the range of 10 – 50 nanometers. Lastly, ISM also provides laboratory and industrial-scale inline sterilizing filters that make finished product sterilization simple and fast.