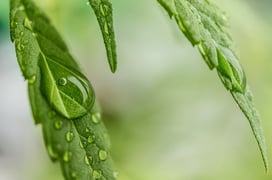 Medicinal uses of the cannabis plant (e.g., medical marijuana, hemp) have now been legalized in most US states. In addition to terpenoids and flavonoids, the plant may contain over 85 different types of therapeutically active compounds known as cannabinoids, the main two of which are tetrahydrocannabinol (THC) and cannabidiol (CBD). In recent years, medications based on concentrated cannabis extracts have become popular because they allow many routes of administration that are preferable to smoking the plant itself.

Oral administration using cannabis extract-infused food (edibles) or beverages is potentially one of the most convenient routes because it does not require special equipment and is appropriate for most patients. There are, however, several important challenges. Concentrates are sticky, viscous and hydrophobic substances, which are difficult to handle and incompatible with water. When consumed as edibles, they act through gastrointestinal absorption and exhibit delayed (up to several hours!) onset of action.  Formulating "medicated" beverages has also been challenging due to cannabis extracts' poor solubility in water, which severely limits the deliverable doses. In addition, poor water solubility results in low bioavalablility: only a small fraction of orally administered cannabinoids is absorbed, requiring patients to consume a lot more than would otherwise be necessary.

Luckily, the pharmaceutical and cosmetics industries have a well-established solution for overcoming these challenges: the delivery of a water-insoluble drug can be tremendously improved by formulating it as a nanoemulsion.

Cannabis extract nanoemulsions (nano-cannabinoids) provide exceptionally high bioavailability and therapeutic effect, and are absorbed by the body, either orally or through the skin, very rapidly and completely. In fact, the uptake starts to occur in the mouth almost immediately upon oral administration. This means higher potency and faster onset of action for lower doses. In addition, nano-cannabinoids are water-compatible and can be easily mixed into beverages at essentially any desired concentration.

During nano-emulsification with ultrasound, the necessary shear forces are created by cavitation, which produces violently and asymmetrically imploding vacuum bubbles and causes micro-jets that break up cannabis extract droplets down to the nanometer scale. High ultrasonic amplitudes on the order of 70 - 90 microns are necessary in order to take advantage of this effect.  In addition to being able to produce high amplitudes, the utilized ultrasonic technology must be directly scalable.  During the scale-up, it is essential to make sure that the ultrasonic amplitude and other conditions remain the same: this will ensure that the final product quality is unchanged while the productivity rate is increased.

It all boils down to direct scale-up. Due to technological limitations, when a conventional ultrasonic processor is scaled up, the maximum ultrasonic amplitude it can provide (along with the resulting cavitation intensity) drops well below the level needed for nano-emulsification.

ISM's Barbell Horn Ultrasonic Technology (BHUT)-based bench and industrial-scale ultrasonic liquid processors are free from this limitation and can provide the same high ultrasonic amplitudes and cavitation intensities as are taken advantage of during laboratory optimization.

With our technology, one can expect reproducible post-scale-up results, where the production rates are increased by orders of magnitude without any loss in the final product quality. ISM's commercial-scale processors are widely used in the pharmaceutical and cosmetics industries to continuously produce nanoemulsions with exceptional quality.

Further information about our technology is available in this video.