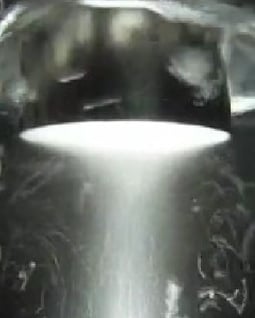 Chemical and physical effects of cavitation

While purely chemical effects of ultrasonic cavitation intensify somewhat with frequency, the mechanical action has a strong and opposite frequency dependence. Industrial ultrasonic processors designed to introduce strong shear forces into the treated liquids, therefore, tend to operate at the lower edge of the ultrasonic spectrum (~ 20 kHz).

An (oversimplified) explanation of the underlying mechanism

The underlying principle of the cavitation cloud formation can be explained using the following example. Consider what happens to the liquid in a half-filled closed syringe after a plunger is pulled back (animation on the left side). Since the volume in the syringe increases, the liquid is stretched and will rip apart at any imperfections it may contain (specks of dust, gas bubbles, etc.), forming low-pressure voids. If the plunger is released, it returns to its original position on its own, and the voids collapse. If the plunger is pushed back instead of just being released, the intensity of the collapse increases. Note that during this "implosion", the walls of the void bubbles travel much faster than the plunger does.

This effect requires the plunger to make a tight seal with the walls of the syringe. In an open container, the liquid from outside of the area under the plunger would simply fill the voids before they could be formed. In the case of an ultrasonic horn vibrating at 20,000 times per second (animation on the right side), however, the liquid does not have time to flow into the area. This situation, therefore, to some extent resembles that of the plunger in the syringe, and the cavitation cloud (with much smaller vacuum bubbles) is formed.

The cavitation bubble dynamics, schematically presented in the above figure, shows the growth and asymmetric collapse of the low-pressure cavity, resulting in a micro-jet. Bubble oscillation that takes place simultaneously with its growth is not shown. As the bubble oscillates and grows, it draws the vapor of the surrounding liquid into its interior, along with any dissolved gasses. This process is called "rectified diffusion". The pressure in the bubble remains relatively low, which helps its final implosion. During the final stage of implosion, the speed of the bubble's wall can exceed the speed of sound in its gaseous interior. This creates a shock wave (similar to that created by an airplane when it crosses the sound barrier) in the bubble, breaking it up into tiny fragments, which subsequently become inception points for further cavitation events.

The collapsing cavitation bubbles produced during sonication generate intense broad-spectrum "hissing" noise with levels that can exceed 100 dBa. It is, therefore, important to take health and safety  precautions when using ultrasonic liquid processors.

In our next post, we will provide some visual examples of the chemical and physical effects of ultrasonic cavitation.