Ways to Consume Cannabis: How Water-Compatible Nanoemulsions Can Help 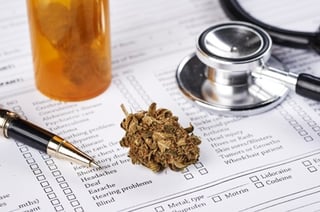 There are many ways to administer medical and recreational cannabis, each with its own benefits and drawbacks. One common feature, however, is that only a certain (generally small) percentage of the consumed cannabinoid content, defined as "bioavailability", can be absorbed into the bloodstream with each method. This stems from the fact that cannabinoids are not water-soluble and, therefore, not readily compatible with the predominantly water-based human body. Water-soluble compounds such as ethanol, on the other hand, can be quickly and efficiently delivered to the bloodstream via a variety of alcoholic beverages, eliminating the need for other delivery methods. Wouldn't it be great if the same could be done with cannabis?

Well, now it can! As described in our previous blog post, cannabis-infused beverages with enhanced bioavailability profiles and rapid onset of action can now be made by using nanoemulsions. For those who prefer other delivery routes, nanoemulsions can help as well. In this article, I will go through the main cannabis administration methods and explain how using water-compatible nanoemulsions of cannabis extracts or isolates can be beneficial for each.

There are four main routes of delivering cannabis to the bloodstream: 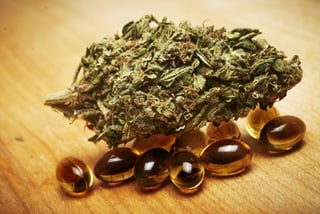 Oral bioavailability of hydrophobic (water-hating) bioactive compounds is known to be very low [1]. Poor water solubility of these compounds leads to slow and inefficient bloodstream absorption. In order to be absorbed, they must first travel through the stomach into the small intestine and become incorporated into mixed micelles by lipases, phospholipids and bile salts released by the gallbladder, after which they can be transported across the epithelial tissue into the bloodstream and to the liver (the "first pass effect"). Thus, it takes over an hour for cannabinoids consumed as edibles or gel capsules to start arriving in the bloodstream, and only about 6 - 8 % of the originally consumed amount ever makes it, the rest simply goes to waste. To make matters even worse, the absorbed amount is strongly dependent on each person's metabolism and other foods that may have been previously or simultaneously consumed, making it difficult to determine what dose should be administered.

How cannabis oil  can 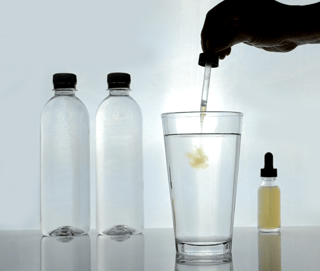 cannabis nanoemulsions can be easily mixed into and consumed as part of practically any beverage. Since they comprise nano-sized oil droplets and already include all the necessary carrier oils, they are to a large extent able to directly penetrate through the mouth, throat,  and stomach lining into the bloodstream. This results in a very quick (10 - 15 min) onset of therapeutic action. The pharmacokinetic profile of such "direct uptake" is similar to that of smoking, vaping or dabbing (see below), and can be of as "vaping through the stomach". The rest of the nanoemulsion arrives in the small intestine, where it is digested and absorbed in a way similar to common edibles, but much faster and more completely. Since the nanoemulsion already droplets similar in size to the mixed micelles to be formed in the small intestine, its digestive absorption does not require large oil globules to be broken down into nano-particles. The most inefficient step occurring during the digestive absorption of edibles and gel capsules is thereby circumvented. The results of replacing traditional edibles and gel capsules with nanoemulsion-infused beverages, therefore, include superior bioavailability, faster onset of action and straightforward dosing with fewer pharmacokinetic variations.

These methods involve creating and inhaling air suspensions of small cannabis oil droplets using heat from a flame (smoking) or an electrical atomizer coil (vaping, dabbing). Smoking is the most traditional cannabis consumption method that does not (but may) require any special equipment beyond rolling paper and a lighter. Many people, however, do not like the harsh experience and potential health hazards associated with smoking. Vaping and dabbing are commonly seen as safer and lower-cost alternatives to smoking. Although they are "cleaner" than smoking, these methods are also harsh on the lungs, produce odor and second-hand effects, and are associated with potential health risks [2, 3].

The main advantage of these methods is that they produce rapid effects. Cannabis oil droplets condensing in the lungs are quickly absorbed into the bloodstream and are directed to the brain and not the liver, as they would be in the case of digestive absorption. The bioavailability, on the other hand, is still relatively low and unpredictable, since most of the inhaled smoke or vapor is exhaled and lost, and the manner in which this happens strongly depends on the individual.

How cannabis oil  can 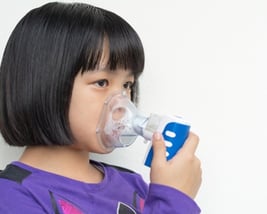 cannabis can be consumed in the form of a beverage and give you quick and predictable results, would you still ? If pulmonary delivery is still preferred, nanoemulsions can be used in conjunction with a nebulizer - a device that creates an inhalable mist from a water-compatible liquid. The advantages of this approach over smoking, vaping or dabbing include significantly milder experience (appropriate for children and elderly patients), higher bioavailability (mist is practically not exhaled), and practically no odor or second-hand effects. 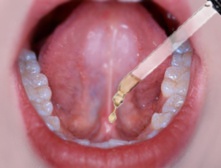 During transmucosal delivery, active substances diffuse into the bloodstream through a mucous membrane, such as the tissues under the tongue (sublingual, via a tincture) [4] or in the nasal cavity (intranasal, via a nasal spray) [5]. Although significantly less common, the delivery may also be made through the rectal wall (rectal, via a suppository or cream) or the eye cornea (ocular, via a  ointment or eye drops) [6].

The sublingual method of administering several drops under the tongue is common for consuming cannabis oil tinctures (cannabis extract solutions in a carrier oil or alcohol) and is relatively fast-acting and effective. Holding the drops under the tongue for a sufficient period of time is, however, rather difficult, and most patients end up swallowing the . 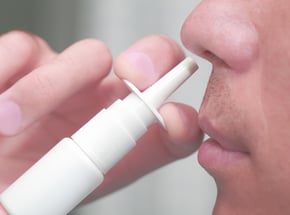 Nasal sprays are also commonly used to deliver cannabis oils through the well-vascularized mucosa of the nasal cavity directly into the systemic blood circulation.  This intranasal method is fast and, in most cases, efficient, although somewhat uncomfortable and limited to small amounts of liquid per spray. The bioavailability of this administration method is also highly unpredictable due to the variability in the amount of sprayed liquid that passes through the nasal cavity and is swallowed. An upper airway infection or differences in spraying mechanisms can also result in strong pharmacokinetic variations [5].

How cannabis oil nanoemulsions can help:

cannabis oil can now be consumed in the form of a beverage and produce fast and predictable effects, there is no need to To a large extent, nanoemulsion-infused beverages already act via the transmucosal absorption mechanism, penetrating through the tissues of the mouth, throat, esophagus and stomach directly into the bloodstream. For those who still prefer the sublingual or intranasal route, nanoemulsions offer superior absorption kinetics and complete water compatibility, which eliminates the need for alcohol, polyethylene, propylene glycol or glycerin in the formulations. 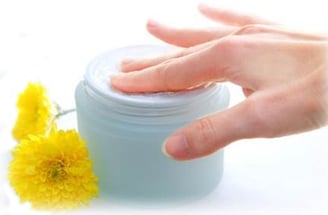 Transdermal delivery represents an attractive alternative to oral, pulmonary and transmucosal administration routes. With this method, active ingredients are absorbed into the bloodstream through the skin from an externally applied cream, ointment or patch. It should be pointed out that topicals are used for localized effects (e.g., to treat local inflammation, pain or skin conditions) rather than for the delivery into the systemic blood circulation and, therefore, are not the same as transdermal creams [7]. Although convenient, the transdermal delivery method using traditional formulations is slow and inefficient because of the complexity and low permeability of skin structure.

How cannabis oil nanoemulsions can help:

formulation  non-greasy, more spreadable and stable, have better active substance loading capacity, and can be easily washed off the skin whenever desired.

Cannabis oil nanoemulsions (a.k.a., water-soluble THC or CBD) are simple to make with Industrial Sonomechanics’ patented Barbell Horn Ultrasonic Technology (BHUT) and stabilizer packages. Nanoemulsions can comprise tens of mg/ml of cannabinoids, and may be made translucent, allowing them to be mixed into  without compromising its optical clarity. Detailed formulation development and process optimization procedures are available in our free eBook: "Making Stable Emulsions".

Benefits of the ultrasonic production of cannabis oil nanoemulsions include: 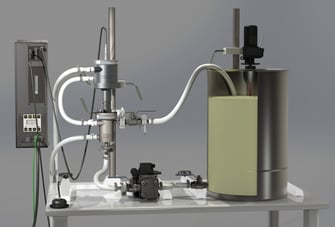 Further information on CBD and THC nanoemulsions, including how they can be prepared using ultrasonic liquid processors, is provided in our recent blog post: "All-In-One NanoStabilizer™ Simplifies Making Water-Soluble CBD and THC".

Have comments? Please do not hesitate to leave them below. We are preparing more articles on the topic of Medical Cannabis. Subscribe to our blog by using the link at the top of this page and you will be notified when they go live!