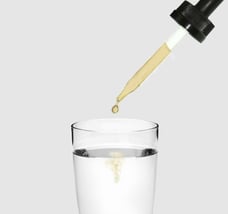 Industrial Sonomechanics is launching a series of blog posts dedicated to describing the main principles of developing water-compatible cannabis extract formulations, also known as water-soluble CBD and THC. As explained in our earlier blog post, since medical marijuana extracts are oils and, as such, not soluble in water, they have to be specially formulated in order to become water-compatible and acquire the appearance of being water-soluble. There are three formulation classes that can provide this property: microemulsions, liposomes and nanoemulsions.

Microemulsions and nanoemulsions are described in our earlier article as well as in this free eBook:

However, due to a large number of questions we have been receiving on this subject, we though that it deserves to be expanded upon in this separate article.

Oil-in-water emulsions are visually homogeneous mixtures that combine the properties of both oil and water, wherein water is the continuous phase and oil is the dispersed phase, stabilized by at least one surfactant (emulsifier). There are three main types of oil-in-water emulsions: macroemulsions, microemulsions and nanoemulsions. Liposomes can be used to create similar types of oil and water mixtures with some notable differences, as explained below.

Macroemulsions are common emulsions with droplets averaging over 1 micron in diameter and generally having wide droplet size distributions. They are unstable and tend to separate into an oil layer at the top and a water layer at the bottom, sometimes with a mixed layer in between. Due to their lack of stability, macroemulsions are generally not suitable as water-compatible cannabinoid delivery vehicles.

Microemulsions are translucent and thermodynamically stable mixtures of oil, water and surfactants having average droplet diameters below 100 nm. 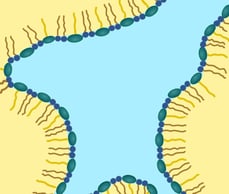 They can be spontaneously formed by “solubilizing” the oil in water or a beverage by very high amounts of surfactants - substantially higher than the amount of the oil. Because of many undesirable side-effects caused by concentrated surfactants (health issues, taste deterioration, etc.), the use of microemulsion-based, water-compatible cannabis oil formulations is disadvantageous. Furthermore, it is frequently impossible to achieve the desired cannabinoid concentration in a beverage without exceeding maximum permitted surfactant levels.

A typical microemulsion precursor (before the addition to a beverage) formulation is presented below [1]:

For a typical cannabinoid dose of 10 - 15 mg, about 20 – 30 mg of cannabis oil extract (assuming 50 – 70 % cannabinoid concentration) needs to be mixed into a beverage. With the microemulsion-type formulation, the same beverage will also end up with about 120 - 180 mg of surfactants, making it taste soapy and (for many surfactants) bitter, as well as potentially leading to regulatory compliance issues. 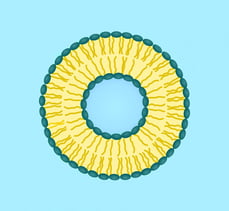 Liposomes are spherical structures with diameters from about 50 to 5000 nm formed by one or more concentric phospholipid bilayers with an aqueous phase inside and in-between the bilayers. Liposomes can entrap water-soluble (hydrophilic) active ingredients in their internal water compartment and water-insoluble (hydrophobic) active ingredients in their bilayer membrane. The latter property makes it possible to use liposomes to formulate water-compatible cannabis extracts. This, however, involves complex preparation procedures and, as with microemulsions, very high surfactant (lecithin phospholipids) concentrations. In addition, it is difficult to produce liposomal formulations using natural cannabis extracts, requiring the use of synthetic or isolated cannabinoids instead.

A typical liposome precursor (before the addition to a beverage) formulation is presented below [2]: 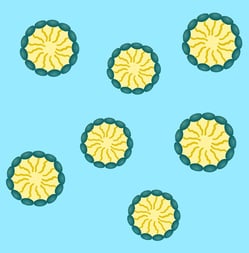 Nanoemulsions are emulsions with narrow droplet size distributions centered below approximately 250 nm. Nanoemulsion-based formulations in which all droplets are smaller than 100 nm are optically translucent, achieving progressively higher degree of clarity as the droplet sizes are diminished. These formulations have several attractive properties, including low viscosity, high interfacial surface area and long-term kinetic stability. Nanoemulsions are made using significantly (about 10 times) lower surfactant amounts than microemulsions or liposomes. They are completely water-compatible and can be easily mixed into water or any beverage.

A typical nanoemulsion concentrate (with some water, but before the addition to a beverage) formulation is presented below [3]:

For a typical cannabinoid dose of 10 - 15 mg, requiring 20 – 30 mg of cannabis oil extract to be present in a beverage, a nanoemulsion-type formulation will only contain about 7 - 11 mg of surfactant, making the beverage much easier to bring into compliance with regulations and helping it retain its original taste. In addition, nanoemulsions can be produced using natural surfactants (formulation shown above), which avoids having any synthetic ingredients in the resulting products.

The reason that cannabis oil nanoemulsions require much lower surfactant concentrations than the alternatives is that the driving force for their formation is mainly mechanical instead of chemical. Nanoemulsions can be produced by utilizing ultrasonic cavitation-derived high shear forces, able to break the oil droplets down to nanometer sizes.

Laboratory, bench and industrial-scale ultrasonic liquid processors specially designed for the production of high-quality nanoemulsions are available from Industrial Sonomechanics. We also offer help with the development of formulations for “nano-cannabinoids” starting from different types of cannabis extracts or cannabinoid isolates.